Since the late 1800s when the Wimbledon Lawn Tennis Club was founded there has been a strict dress code: competitors in their Tennis Championship games could wear any color… as long as it was white! But every time I watch Wimbledon I can’t help but wonder why this rule was established. Why do tennis players wear white at Wimbledon?

It seems that there are quite a few theories in circulation regarding this time-honored tradition. The following four reasons are the most often touted ones:

In the late 1800s and early 1900s it was considered extremely unladylike and ungentlemanly to show signs of perspiration. As a result, white tennis outfits were encouraged because the color white is particularly good at masking any dreaded sweat marks. (Atkin 2010)

The Wimbledon Tennis Championships occur in the summer months so one often-suggested idea is that the white dress code is a practical matter to ensure the competitors keep cool as their clothes reflect the sun’s heat more efficiently.

Considering that in the early days of tennis long sleeves, long pants and ankle-length dresses were expected to be worn by gentlemen and ladies, the white color was particularly important as the main method to relieve heat.

Some sources suggest that the all-white dress code at Wimbledon was strictly adhered to in order to create an exclusive, high-class feeling at the Tennis club. Crisp, white clothes carried an underlying implication that all their members were well-kept, clean, civilized, respectful of rules and generally “high-class”.

To this day critics are heard saying that the white clothes rule adds an air of classiness to the Wimbledon Championships.

After a while, the rule that tennis players wear white at Wimbledon became a tradition, which lent yet another reason for the dress code: adhering to it simply to respect the history of the Wimbledon Tennis Club.

Although the color code hasn’t changed much over the years, the fashions have changed immensely! Check out some of these earlier tennis outfits worn at Wimbledon in the late 1800s and early 1900s: 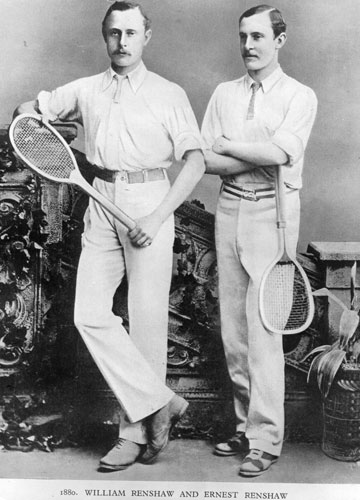 Yes, in the early days long white pants were worn to play tennis! The first man to wear shorts at Wimbledon was Bunny Austin in 1932. 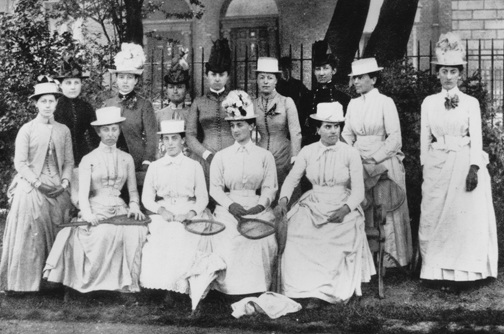 I know it doesn’t look like it but these women holding the rackets are dressed for tennis! The first women who played tennis at Wimbledon had to wear a white heavy flanel-like material, bustles, hats, corsets and some even opted for furs! The tennis fashion remained conservative for many years. Here’s another picture from 29 years later in 1913:

It was only in 1919 that corsets vanished and lighter calf-length frocks with short-sleeves were introduced to Wimbledon, as can be seen in this 1920s photograph:

We’ve come a long way since then!

Related Articles
- Why do we call zero “love” in tennis?

This entry was posted in Culture and tagged Culture, fashion, sports, tennis. Bookmark the permalink.