Why do I have high or low social status?

First of all, let’s be clear on what we mean by “status”

Status as a concept refers to how valuable a person is seen to be in society.

High social status implies a person is valuable and dominant in their role in society, often taking on the role of leaders. They are led by a need to dominate. These are the stereotypical alpha males or females. Note that high status is not synonymous with “good”.

A low social status person has an air of being more dispensable in their social role, although often they play important supporting roles in society. They are led by a need to survive. These are the stereotypical beta and omega males or females. Note that low status is not synonymous with “bad”.

Internal vs External Status
There are two important levels of status: internal status, and external status. Both of these affect the way we feel and behave in society.

Internal status is your personality-driven, inborn tendency of behaviour. “Inner game” affects internal status. It’s affected by how valuable you feel, and how confident you are in yourself, regardless of external factors.

External status is determined by things like your job, wealth, qualifications and other external things which can affect how valuable you appear to society.

What status am I?
The best way to tell what internal status you have is by looking closely at how you interact with others in terms of body language and vocal expression.

Some people are very good at putting on an act of high status when inside they feel low status. For such people, the best way to tell your true status is by seeing your body language and vocal expression when you are under stress or pressure, because that’s when instinctual responses kick in, revealing your deeply engraved internal status.

Body language gestures that give away your status
Most people are unaware of the constant displays of dominance and submission around them, but once you start looking out for them, you see them everywhere!

Note that people are hardly ever “pure” types, so you may only have some features of one status and some of the other. The type you have most in common with is your status type. 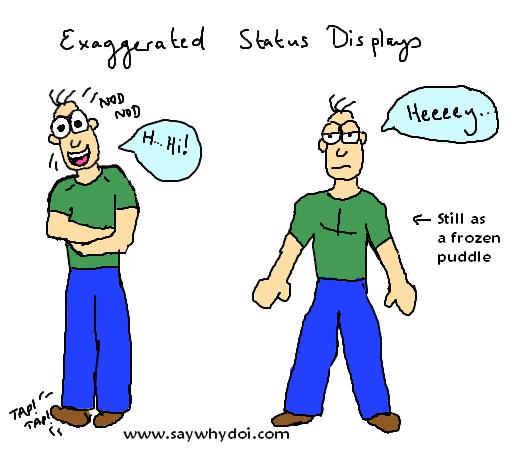 How ways of speaking can give away your status:

Low status Speech:
Fast speech: Like many prey animals that move quickly, low status people speak quickly. It’s as if they have to get the words out quickly before someone with a higher status interrupts them and they have to give up their speech to them. Speaking fast makes them talk in a way that may seem jerky, clipped and not fully thought-out, so they can have a lot of hesitations, ums, ers and uhs, stammering, stuttering and changes of direction in the flow of speech with phrases like “I mean..” and incomplete sentences. They tend to speak in short bursts. Vowels are very short, in line with the fast speech. Eg “ah” and “um” as opposed to “aaaaah” and “uuuuuum”. Apologising often is common as they don’t want to appear a threat in any way. If interrupted, they give in and let the interruptor take over their conversation. Inflection of voice may have a tendency to rise at the end of a sentence so much of what they say may sound like questions – as if asking permission for their thoughts to be heard. They may often question “is that ok?” rather than deciding things for themselves. They may have a tendency to speak softly so as not to appear threatening.

High status speech:
Speak slowly; taking their time. It’s as if they know that what they are saying is worthwhile and their thoughts deserve adequate space to be thought-out and expressed properly. They make longer vowel sounds; (ie aaaaaah, uuuuum as opposed to ah and um). They may often speak loudly and raise their voice because they aren’t concerned with sounding threatening. They can meet any threat that comes their way in response.

OK, I think I know what status I am now… But *why* do I have High or Low Status?
There are 2 main factors which determine status:

Actor Alan Marriott, who is well-versed in observing and re-enacting status through body language, described how he observed the first signs of status as they arose in his children after they were born. He noticed that within weeks of birth, his children already showed signs of a tendency to be either high or low status, and this tendency was most apparent in times of stress or pressure. He observed that high-status-born babies are more relaxed and calm, whilst lower-status-born babies tend to be more anxious. These tendencies noted in babyhood were found to be retained throughout his children’s lives.

Although we may have an inborn tendency to lean towards one status or another, the way we are brought up conditions us to modify our internal status.

Conditioned status is also affected by external factors such as:

Achievement-linked Status: This is determined by factors like education, job, acquired wealth, acquired strength, expressions of beauty such as through taste in clothes, social achievements, marital status, and amount of power or prestige.

It’s really important to remember that it’s the internal status that counts, not the external one. A cleaner is just as likely to have high status as a King and it is very possible that a King could have low inborn status.

Always remember that one status is not better than another
Although it may seem like high status is better than low status, it isn’t. If our tendency towards one status or another is genetic, and both genotypes survived to this day, then this implies that both high and low status are effective survival strategies.

In fact, high status is a more risky way of being than the low status strategy, because high status people can provoke one another into attacks. Ever see the nature shows where animals fight over the alpha position? The results aren’t pretty.

Low status doesn’t condemn you to being a weakling or insecure. It is possible to be low status and simultaneously confident in your self-worth and value, even if you don’t seek out to be a dominating leader.

This entry was posted in Body Language, Psychology and tagged body language, psychology. Bookmark the permalink.

23 Responses to Why do I have high or low social status?