Why do we have the engagement and wedding ring custom?

We’ve all seen it hundreds of times in movies: The handsome hero hunkers down on bended knee, smiles at his beloved adoringly through sparkling eyes, and whips out a twinkling engagement ring. Engagement rings are offered as a promise of marriage. But where did this tradition of giving rings in engagements and weddings start?

The origin of the wedding ring custom began in Ancient Egypt
Some suggest that since Neanderthal times gifts were exchanged as tokens of a special relationship. However the origin of an actual ring being given as a token of love appears to date back to Ancient Egypt, about 5000 years ago. We know this through archaeological evidence which found hieroglyphics depicting wedding bands.

The Egyptian grooms would take plant stems from reeds and rushes, and they’d twist and plait them into rings and bracelets which would then be presented to their brides. 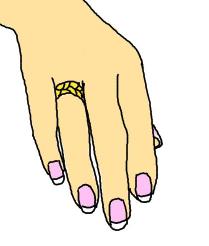 It is believed the Egyptians considered the circular shape a symbol of ever-lasting love and good omens, as it is also the shape of the holy Sun and the Moon.

The hole in the centre of the ring was symbolic of the unknown things to come in their new life as a married couple.

Like many of us today, the Egyptians wore their wedding ring on the 4th finger of the left hand. The origin of this custom is from the belief that there was a vein running from this ring finger, all the way to the heart. So by wearing a ring on this finger you are saying that the person who gave you that ring has a direct link to your heart.


Many years later, the Ancient Greeks adopted this wedding ring custom and belief as their own, when they conquered Egypt in 332 BC. Fast-forward a few more years and this tradition was passed on to the Romans, who added a name to this special heart-linked vein, calling it the “vena amoris”: the vein of love.

Over time, wedding rings evolved and were no longer made of plant stems, but of more durable leather, ivory, bone and once the art of metalwork became more refined, they began to be made of metal, although the first metal rings were quite uneven and uncomfortable to wear! In Roman times, most rings were made of iron.

Over time, the symbol of the ring also evolved. For many, the ring somewhat lost some of it’s romantic significance, as marriage became more of a contract for security than an exchange of love. The ring became the mark of a legal agreement, marking a contract between families rather than between lovers, where the ring was the binding force. The ring became an indication of financial security that the husband could offer his new wife.

At this time only women would wear engagement and wedding rings. In fact, in the early 1900s, reports show that only about 15% of grooms wore a wedding ring. Men only started wearing wedding rings in comparatively modern times, around the time of World War II, and later the Korean War, when men wanted a physical reminder of their wives to bring them cheer and hope as they fought far from home.

Back in Roman times, so much did the ring become a sign of offering financial security, that there was even a phase when it was fashionable for women to be given rings with keys attached to them, where the key was her access to her husband’s safety deposit box of valuables.

The wedding ring tradition passed down to Medieval Times
In line with this view of marriage as a necessary means to give a woman financial security, in Medieval Europe, the more expensive the metal for the ring, the “better” the man’s marriage proposal was seen to be.

Once gold metalwork began, it soon became the material of choice for wedding rings. And if a man could afford gemstones on the ring as well – all the better! Sometimes further gifts of leather pouches full of gold and silver were given to the bride as part of the marriage ceremony following the ring exchange.

Romance was not dead however, as ruby gemstones in the ring not only showed the wealth of the husband, but also symbolized the colour of love. Similarly, diamonds became the symbol of indestructible and long-lasting love, as of 1477 when the first documented diamond ring was given by the Viennese Archduke Maximilian to his beloved Mary of Burgundy. Diamond rings only really became popular around the 1930s.

The Christianization of the wedding ring tradition
Although there are no Christian biblical references decreeing the ring as part of the wedding ceremony, there are some references to rings being given as tokens of fidelity (Genesis 24:22.30.53; and 41:42) and symbols of adoption (Esth 8:2,8; Luke 15:22). Considering this together with considerations of the public popularity of the marriage ring custom, in the 12th century, Pope Innocent III officially accepted the ring exchange into the Christian wedding ceremony. He created the tradition of placing the ring on the index finger, middle finger and finally ring finger, representing the Holy Trinity, as they recited: “In the name of the Father, the Son and the Holy Ghost”.

Not all Christians adopted the ring-giving tradition. Some Christian groups shun the idea of jewellery altogether, believing it to be wasteful and immoral, and believing it promotes the negative idea that beauty is on the outside rather than on the inside. (This is based on 1 Timothy 2:9-10 and 1 Peter 3:3-4). As a result, in 19th century America, a tradition of giving a thimble as an engagement gift arose, rather than a ring. In spite of this – slightly rebellious brides may have removed the top of the thimble to make it into a secret ring!

So what does the engagement and wedding ring tradition symbolize today?

1.) The Circle as a sign of eternal, never-ending love
The original Egyptian symbolism of the ring remains: It’s circular shape being the mark of eternal love. An unbroken promise of commitment and love.

2.) Chinese Symbolism
There is a really beautiful ancient Chinese symbolism related to wearing the wedding ring on the ring finger.

It’s easiest to explain the significance of the ring finger through a little demonstration:

Related Posts
- Why do grooms wear a pocket square at weddings?
- Why marry? Why do people get married?
- Why do people go on honeymoons? And why do we call it a honeymoon?
- Why do we write RSVP on wedding invitations?

This entry was posted in Culture, Weddings and tagged Christianity, Culture, traditions, Weddings. Bookmark the permalink.

11 Responses to Why do we have the engagement and wedding ring custom?