The Back Pat: Why do we pat on the back?

Whether you’re giving someone a bro hello-hug, comforting someone or congratulating them, the pat on the back is a gesture that’s very much part of every day life. Why is back patting done?

The origin of the comforting back pat:

In early babyhood, it’s vitally important for the mother to embrace and hold the baby as much as possible, to replicate the comforting envelopment the unborn-baby experienced in the womb. When the baby is feeling a bit cranky, it’s common to see the mother patting the baby on the back, and this, when combined with gentle rocking and soothing noises, can help calm the baby. The patting is a reassurance action that draws more attention to the embrace. The back patting gesture says: “I’m here to hold you, look after you and protect you, so relax.” It also signals there is no danger, otherwise the mother would be holding the baby tightly rather than patting it gently on the back.

This scenario is very much like the comforting back-patting gesture we do to our friends, lovers, family members and even strangers when they are upset.

Sometimes, back patting may be done by a person when they themselves want to be comforted. It’s as if they are saying “I do to you what I want you to do to me”.

The origin of the congratulatory back pat

After babyhood, children often experience patting that is no longer restricted to the back. Head pats, cheek pats, and even stomach or butt pats become common as an evolved form of “I’m here for you, you’re safe”, to become “All is well”. “All is well” soon evolves into “Well done you! You’ve done well!”, and this is the origin of the congratulatory pat, and back pat.

In children, it is customary to pat a child’s head when they’ve done something clever, as if you are congratulating them on their good brain. But because head patting is associated with childhood, it is seen to be patronizing to do to adults. Back-patting is the more accepted way of saying that a person has a good brain, or for saying well done on performing well, be it in a sporting event or some other event.

The origin of the bro-hug back pat

If you’ve ever been hugged by a chimp, you’ll see a lot of similarity between a chimp-hello-hug and a bro-hug! Both involve an embrace accompanied by a few pats on the back. According to the variety of bro-hug, humans may differ from chimps in adding a handshake to the procedure.

Both chimps and humans evolved the mother-child back pat into a formalized, stylised, socially accepted way for adults to embrace. It links back to the original maternal back pat which is a sign of caring for someone and being there for them. Sometimes the embrace is cut out completely and two bros simply give one another a hello back pat instead of an embrace. To be extra manly, the pats may be extra strong. Caution: There may be some risk of being sent flying.

Whilst the origin of the bro-hug may be rooted in the original loving maternal embrace, people may do it without love behind it, simply because it is a culturally accepted welcome. The amount of eye contact and the look in a person’s eyes before and after a bro-hug can be revealing as to the feeling behind it. The more eye contact, and the warmer the eyes, the more affection is likely to be behind the back pat. Having said that, people who are uncomfortable with displaying affection may be harder to read and may avoid eye contact not because they dislike you, but because they are feeling uncomfortable.

There is another reason for back pats, especially if done during an embrace-combo-bro-hug or a hug in general. In this case, back patting may signal to say: “Ok, this embrace is long enough. Let’s let go now…”. This can be an indicator of either discomfort with embraces in general or uneasiness hugging that particular individual specifically. Again, examining the eyes can be revealing of the other person’s feelings.

Alternatively the back pat as a signal to stop the embrace may have nothing to do with comfort, but may be rooted in control: The desire to feel in control of the situation by determining the length of the embrace.

How do you know to interpret an individual situation? Observe if the back pat is done with everyone or just with one person. Also pay attention to other signals like facial expressions and eyes, which may give away discomfort or nervousness. If you know a person, try to think if they have signalled a strong need for being in control. Some clues for control-loving may include telling others what’s good for them, ordering for others in restaurants, and generally being a bit bossy. 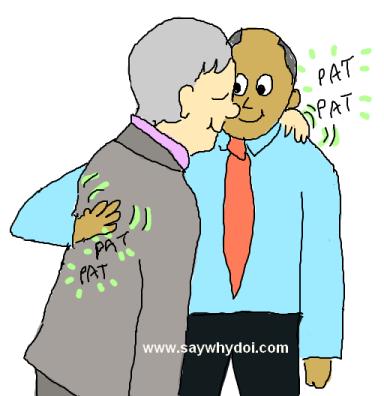 The back pat signalling a desire to be in control

Following on from the back pat as a signal of control when done to end an embrace, it may also be a sign of wanting to dominate and be in control at other times.

In the original back patting situation between mother and child, the patter is the mother, the person in control of the baby’s life and safety. The baby is the passive recipient. People who have a tendency to pat others on the back outside of the embrace situation (especially when there is no congratulations or a need for comforting in the vicinity), may be indicating their need to dominate; a need to feel like the parent: to feel in control.

Sometimes amongst politicians, where there are strong desires for control and power, the patting situation becomes almost comical as they each try to get the last back pat in, to establish themselves as the ones in control.

Back Patting in flirting situations

When a back pat is done in a situation where sexual attraction may be a contributing factor, it could signal “you’ve done well/ congratulations”, it could be a “hello”, or it could be a comforting gesture, but it could also be an excuse to touch in order to get closer and to signal sexual interest. Particularly in cultures where touching is not highly prevalent during everyday conversations, the back pat here could signal: “I feel safe and comfortable enough with you to touch you”, which is a good start for creating intimacy.

It is however important not to jump to conclusions based on just one gesture, because gestures should always be interpreted in clusters and not on their own.

8 Responses to The Back Pat: Why do we pat on the back?