lbs pounds: Why is lb the abbreviation for pounds?

It’s not immediately intuitive how pounds became abbreviated to lbs. Why do we write lbs as an abbreviation for pounds?

When trade and commerce became widespread, humans needed a fair method of exchanging merchandise, and weight comparison became the standard way of assessing the value of goods. The libra balance was the standard way of measuring small amounts of things for everyday use, from gemstones and precious metals to apothecary goods and groceries. In fact one pound of weight was standardized by using one particular grocery as the standard: the barley grain.

In Troyes, France, one of the key market-towns where weight measurements arose, the barley grain was the standard unit of mass with which other things were compared. To this day, some old-fashioned measurements refer to 1 grain (1 gr) of weight, which is equivalent to about 65mg (or to be more accurate: 64.79891mg).

The exact value of one pound varied over time but it is generally agreed that there are 7000 grains of barley in 1 pound’s weight as we know it today.

One good tool to avoid the sometimes embarrassing question of how much you weigh is answering with your weight in barley grains. Direct, honest and elusive all at once! 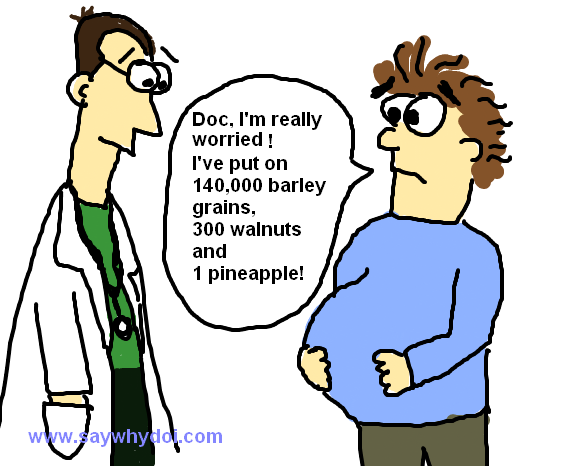 6 Responses to lbs pounds: Why is lb the abbreviation for pounds?