History of the Finger

The Finger, The Highway Salute, The Bird .. whatever you want to call it, giving someone the middle finger is a worldwide gesture aimed to insult. But why would a finger be insulting? Why do people give “the finger”?


There are lots of urban myths floating around surrounding the history of the finger. One of the most widespread fallacies is that it arose from the 1415 Battle of Agincourt. The legend goes that during this battle, the French held a threat over the English archers, that if they captured them, they’d cut off their bow-plucking fingers. As a result, during the fighting, the archers would defiantly stick up their bow-plucking finger (the middle finger), insulting the French for their incompetence in capturing them, and then they’d procede to  rain down more arrows upon them. Whilst this is a colourful story, it is not the true origin of The Finger.

Long before the Battle of Agincourt, back in Ancient Greece, The Finger was already being used. We know this because it’s mentioned in the script of Aristophanes’ play, “The Clouds,” from 423 B.C.

This text, together with other textual references from the later Roman era, tell us the reason why people used to erect their middle finger as an insult. It’s because it represented an erect something else! A phallic symbol.

But why display a phallic symbol in the midst of insults?

Ancient Romans believed that an erect phallus helped to protect against evil spells. So in making this sign with their hands, they were protecting themselves against the evil spells cast their way in the exchange. 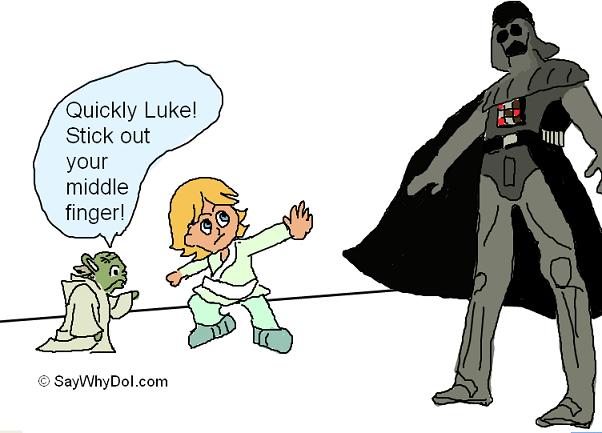 In fact, phallic icons were often seen placed in houses, at doorways, and could be seen decorating the outside of houses, to ward off evil spirits.

Why would a phallus serve to protect against evil? There are several theories. Some suggest that sexual symbols would distract the evil spirits’ attention so that they are unable to put a curse on you.

Today, the middle finger represents remants of this ancient habit, but it is more likely that when people make this gesture, they are more in tune with pure aggressive anger than anything else. Perhaps then this gesture is appropriate, considering that testosterone is one of the main hormones behind aggressive behaviour, and quite fittingly, one of the main sites from which testosterone is made is not too far away from the phallic area.

This entry was posted in Body Language and tagged body language, hand gestures. Bookmark the permalink.

4 Responses to History of the Finger