British Money: Who are the people on UK Bank Notes? Say, why do I see these people on English banknotes?

Since the 1960s, the Bank of England has been printing significant people from British history on the official British banknotes. Most of us handle bank notes every day, but if I were to ask you to close your eyes and tell me who the people on the British bank notes are, would you be able to name them?

Even upon digging into wallets and pulling out the notes, most people may be surprised to find that they don’t recognise some of the historic figures honoured on English bank notes. But fear not! The answers are close at hand! 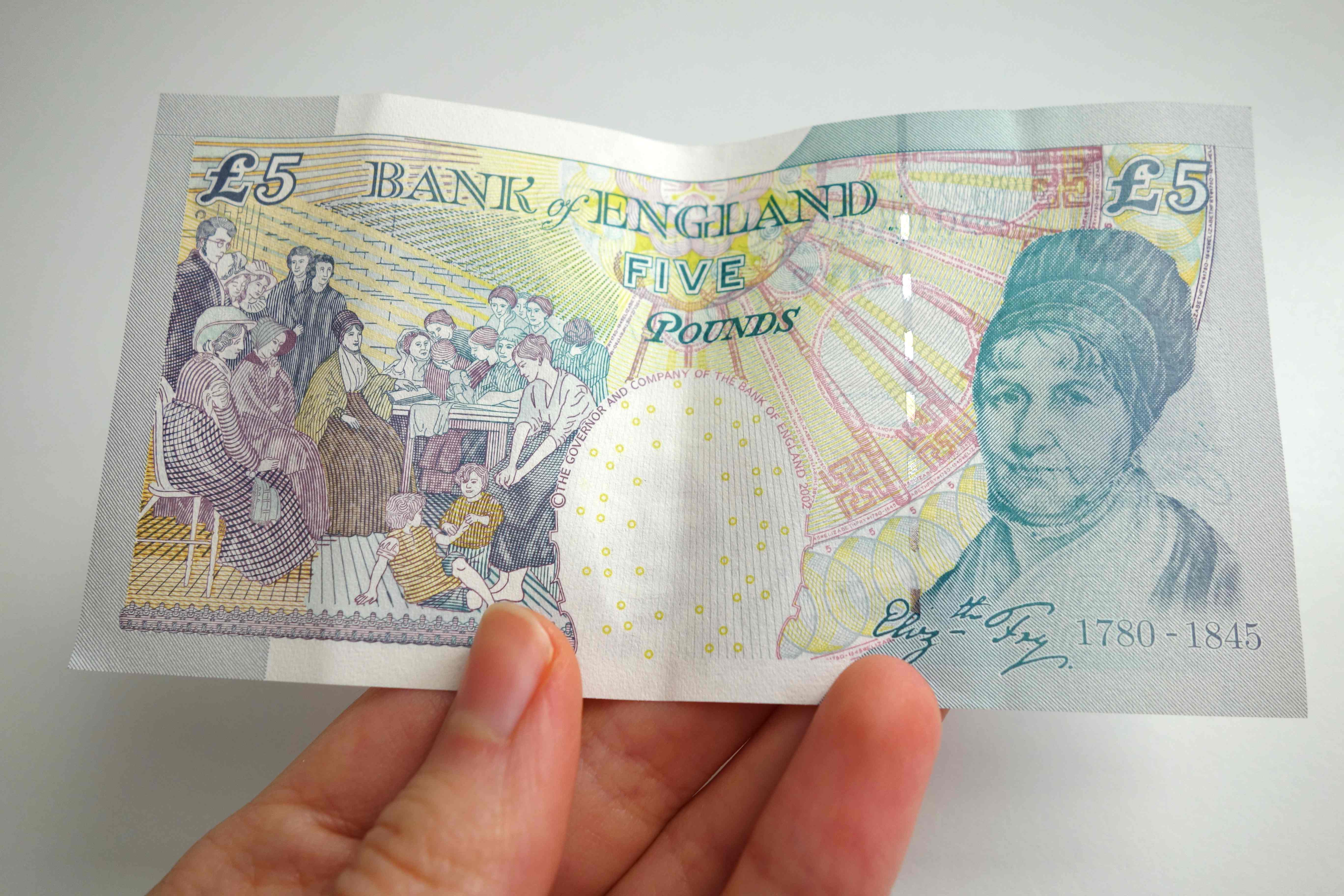 The lady who has been on the £5 since 2002 is Elizabeth Fry and she’s not going to be on the fiver for very much longer – just until 2016. She was honoured for her philanthropy, humanitarian and social reform work in the 1800s. Throughout her life, she endeavoured to help the poor, the homeless and the needy. She is perhaps most famous her work with prisoners; fighting for the rights of female prisoners, campaigning for them to be treated in a more humane way and campaigning to improve their living conditions. Opposite her portrait on the banknote is an image of her at work, surrounded by women and children. Her work was appreciated by the highest of high society, and she is said to have even been granted an audience with Queen Victoria on more than one occasion. On an interesting side note, she was also a mother to 11 children!

In addition to her own meaningful work in society, my own personal speculation is that perhaps the fact that both her parents were important in the banking world may have helped her chances to get on a bank note. Her mother was from the Barclay family that founded Barclays Bank and her father was also an important bank man, being a partner at the then-well-respected Gurney’s Bank in Norwich, which later merged with Barclays Bank.

In 2016, the plans are to replace the Elizabeth Fry fiver with a new Winston Churchill five pound note, to honour his role as Prime Minister of the UK during World War II. You can see the image of this new banknote in this Guardian newspaper article.

The current £10 note was first issued in the year 2000, and has an image of a man who most people would probably recognise: Charles Darwin; biologist and founding father of the theory of evolution. Alongside his portrait there are images of his ship, the HMS Beagle, that he used to travel the world to gather biological specimens and observations which helped him develop his great theory. The note also depicts a tool Darwin used: his magnifying lens, and some flora and fauna that he may have come across on his travels.

In 2017, the current plans are to replace the Darwin tenner with a £10 honouring the author Jane Austen, for her contributions to English literature. You can see the proposed design of the new ten pound note in this article here. 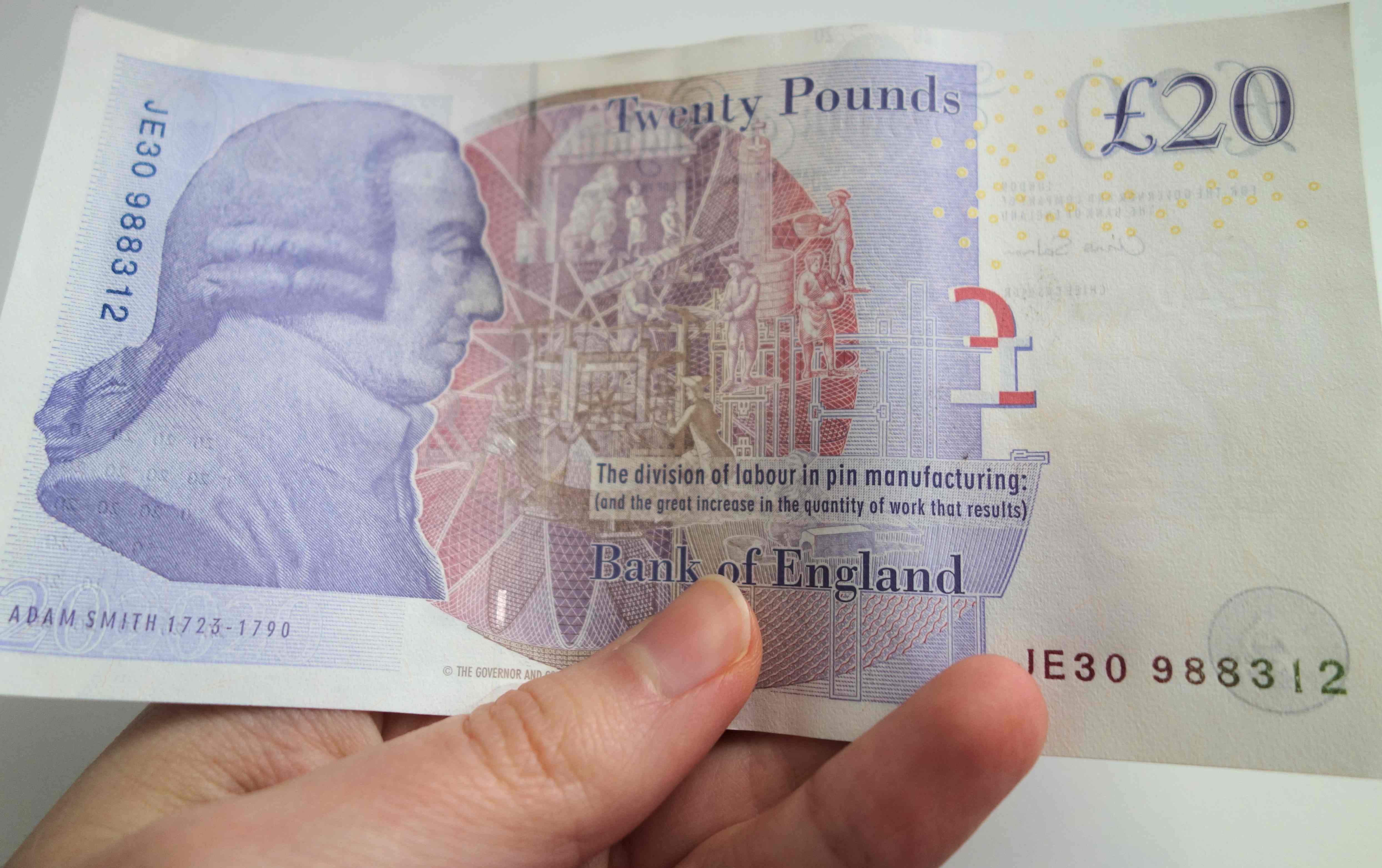 The £20 note that was first published in 2007 shows a portrait of Adam Smith, a Scottish philosopher and economist from the 1700s; a man often cited as “the father of modern economics”. Besides his portrait is some text about one of his most famous contributions: his thoughts about the “division of labour”. His simple but then-groundbreaking idea was that if you divide up the labour efficiently between various specialized workers in a factory, efficiency would rise and a “great increase in the quantity of work” would result.

There are plans to replace Adam Smith on the banknote around 2018-2020.

The £50 note that’s been in circulation since 2011 has two people on it: engineer and scientist, James Watt, and manufacturer Matthew Boulton. (You can see the image of this note here). Together they are both honoured for their roles in developing steam engine technology in the 1700s. Steam-driven machinery is particularly relevant to the banking industry because it was steam-driven machinery that had an important role in the minting of coins at Boulton’s Soho Mint.

Other people who have been honoured on bank notes in the past include:
(I’ve linked each name to an image of the relevant banknote that I found online)

This entry was posted in Culture and tagged Culture, economy, money, United Kingdom. Bookmark the permalink.