When you start seeing pumpkins showing up in unusually copious amounts everywhere, you can safely bet that Halloween is round the corner!

But what’s with all the pumpkins? And how did the whole Halloween pumpkin carving / Jack-o’-lantern tradition start?

Once upon a time it was turnips rather than pumpkins that took center stage on Halloween!

It may be a bit funny to imagine it, but when the vegetable-lantern tradition first started, the vegetable of choice was not the pumpkin but the humble turnip! 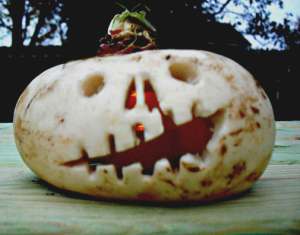 And it wasn’t just the turnip that was turned into lanterns either. Swedes (aka rutabagas), beets and even cabbage stems were also used. These vegetables were used because these were commonly found in Ireland and Scotland where the Halloween vegetable-lantern tradition first began.

When Irish immigrants migrated to America in the 1800s (many coming to escape the famous Potato Famine of 1846), they brought with them their Halloween traditions but since turnips were not as prevalent in the United States as they were in Ireland, a new vegetable was used to form the lantern: the pumpkin. Pumpkins were larger and easier to carve as well as being readily available in America. In fact, even before Halloween was brought over to the United States, pumpkins were already the traditional October-time vegetable since they were abundantly seen in farmer’s market stalls around this time of year. After years of being used as the new vegetable-of-choice for Halloween Jack-o’-lanterns, word of the pumpkin’s use for Halloween was popularized in books, poems, artwork and later on also on TV shows, etching its place in history as the official Halloween vegetable.

But why on earth would you want to turn a vegetable into a lantern in the first place?

Why are pumpkins carved and lit on Halloween? It all has to do with why Halloween is celebrated: Halloween is based on the ancient Celtic/Irish Pagan holiday of Samhain: a holiday marking the end of summer and the beginning of winter. Since the onset of winter is accompanied with the death of greenery and reduced cheery sunshine, this time of year was closely linked to death in general by the Celts. The Celts believed that at Samhain the spirit world and the human world came closer together, increasing the risk of spirits crossing over into the human world and getting up to ghostly mischief.

To help with ghostbusting, the Jack o’lanterns were invented. The idea behind the vegetable lanterns was that the (often scary) faces carved into the vegetables would scare away naughty or evil spirits and ghosts that were believed to get up to all sorts of tricks during Samhain. The lantern’s light also helped to repel the spirits of darkness.

Along a similar theme, in the original Samhain celebrations, bonfires were often lit to ward off the spirits and people dressed up in costumes to confuse the spirits so that they wouldn’t be able to recognize them thus protecting them from being harmed for any personal reasons. Later when Ireland was Christianized (around the 8th century), Samhain became a part of the new Christian holiday called All Hallow’s Eve, or Halloween, and with the passing of time this holiday eventually lost much of its religious bearing to become a popular secular holiday.

Why are Halloween pumpkins called Jack-o’-lanterns?

We’ve established why vegetable lanterns were made and why pumpkins are today carved on Halloween, but where did their name, the “Jack-o’-lantern” come from?

The term “Jack-o’-lantern” was derived from an Irish folktale featuring a character called Jack (also known as Stingy Jack or Drunk Jack). There are several versions of this folktale but this version is my personal favorite:

There was once a poor man called Jack who loved to sit at the pub and drink more than anything else in the world… even though he didn’t really have the money to keep up this habit and had a long overdue pub tab to pay. The pub owner was threatening to cut him off from the bar altogether if his bar tab wasn’t paid soon. The story goes that one day the Devil came upon Jack and offered him a deal: he would be willing to pay Jack’s colossal pub tab and all Jack had to do in return was give the Devil his soul! After thinking it over for a while, Jack, aching for another drink, succumbed to temptation and made the deal with the Devil. But a little while later when the Devil came back to claim his end of the bargain, Jack managed to trick the Devil into climbing up an apple tree and then trapped him up there by carving a Devil-repelling cross over the bark. The Devil, fuming at Jack’s deception demanded Jack let him down. Crafty Jack struck a new agreement with the Devil: he would remove the cross from the tree if the Devil agreed to nullify his right to own Jack’s soul.

Years passed and eventually, as with all humans, Jack’s time came and he died. But since he wasn’t exactly Heaven material, Jack found himself reunited with the Devil upon his death. The Devil reminded Jack that he made a promise not to take his soul and therefore could not admit him into Hell. Instead Jack was condemned to be a lost soul, forever wandering through the twilight world. Before sending him off on his journey, the Devil gave Jack a little ember from the fires of Hell to light his way through the darkness ahead. Jack stored the ember in a turnip (or a Jack-o’-lantern!) and forevermore traveled through the twilight world with this lamp lighting his way.

Superstitious Celts believed that whenever they saw a spooky-looking light in the darkness with little explanation of its origins, it’s likely to be the ghost of Jack and his Lantern.

It is based on this folktale that turnip lanterns were called Jack-o’-lanterns, and when pumpkins started being used instead of turnips, the term was transferred to pumpkins too. Part of the reason they are lit is so that their light and carved faces repel lost soul ghosts like Jack from bothering them.